As reported widely at the time, Elizabeth Pateman was murdered at Moco Farm on the night of 13/14 February 1734.

Elizabeth Pateman was a Steeple Morden lass and the first daughter and second child of John Pateman a butcher and Sarah nee Barons. Elizabeth was baptised 14 June 1716 and buried 21 February 1734, described as maid-servant. The story of the murder appears to have been developed and embellished over the years and the contemporary newspaper account below may be closer to what happened?

The Pateman family was extensive in Steeple Morden and Elizabeth has indirect descendants in the village today. She is, for example, 5 x Great Aunt to Audrey Hitch.

Here is one of the contemporary newspaper reports:

“We have an account from Steeple-Morden in Cambridgeshire, that a barbarous murder had been committed there last Shrove-Tuesday night on the body of Elizabeth, the daughter of John Pateman, and servant to James Hoy of that parish. She had been making holiday the evening before, and came home about 12 o’clock at night with a young lad about 14 years of age her fellow-servant, and being let in by her Mistress , she went to bed; about five o’clock in the morning , the Master awaking, heard her groan, and calling to her to know what was the matter, receiv’d no answer; upon which he got a light, and going into the room, found her on the floor all over blood, her cheek-bone broke, a large piece of flesh cut out of her neck in the jugular vein, and miserably bruis’d in other parts of her body. She lived in this condition 3 hours, but could never speak, or by any sign describe the villain her murderer. A casement was taken down on the south side of the house, and a small iron bar took out of the middle of it, through which the rogue is supposed to have entered. A bloody plough-iron was found under the widow [sic], thought to be the instrument made use of in the murder. The next day the Coroner’s Jury sate [sic] on the body, and were industrious in their enquiry, in order to detect the murderer ; also the whole family and some of the nearest neighbours have been examin’d by two Justices of the Peace; but no positive proof can as yet be made out against anybody; yet people make strange surmises of this affair; there was nothing carried away from the house, tho’ seven silver spoons lay on the table in the room where the rogue was said to have gone in at the window, but three bottles of ale were mov’d out of the cellar into the yard and left there untapp’d. It was given out that her sweet-heart having debauch’d her, to hide one crime had committed a greater; but to remove that suspicion, her body was opened by a skilful surgeon, who declar’d her innocency in that point. The plough-iron was own’d a day or two after by a person who could be no ways suspected of the crime. Upon the whole, the neighbourhood is greatly alarmed at this accident, and the generality of them conclude, that she had been privy to some male-practices [sic] in a person thereabouts who has but an indifferent character, and for fear of a discovery he thought fit to remove her out of the way.” 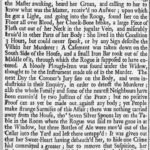 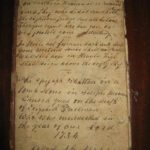 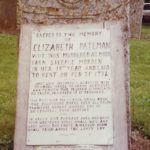 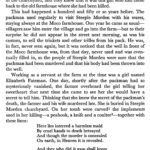