This house is built end-ways onto the road and is made up of two cottages, which for a while in the mid-1800s were four separate tenements.

Around 1780 Joseph Wright, a shoemaker, somehow acquired a modest area of garden ground (a mere 17p), carved out of a small ancient enclosure or perhaps roadside waste owned by the Earl of Hardwicke and Copyhold of Steeple Morden Manor. Later, in the course of Enclosure 1808-1817 the remainder of the small ancient close was merged with the adjoining close and the whole was known as Cook’s Close. At the Wimpole Estate Sale in 1892, Cook’s Close was bought, along with The Bell Inn, by P & A H Meyer brewers of Orwell. Much later Cook’s Close became the site of new housing – Cheyney Close

Returning to Joseph Wright, he had a small cottage built on the land he had acquired and lived there with his wife Mary nee Burr. Mary died 1812 and Joseph 1836. Their son Joseph, also a shoemaker, lived there with wife Susan nee Bonnett. Joseph died in 1841 and Susan moved out, possibly about 1846, dying some years later elsewhere in the village in 1863.

It is difficult to be certain of the exact sequencing, although it seems that Ann Newell, widow of John, who had been tenant of The Hoops PH on The Green, bought the cottage and its garden land in 1846? and built a house with shop on the garden, directly facing onto Cheyney Street. This is today No 24, Hill House.  Ann Newell died 1854 and ownership passed to Henry Routledge, a substantial grocer & draper of Baldock and following his death in 1863  the house with shop and these cottages – now four – were sold by auction as Lot 7 at his Estate Sale in 1864 and were bought by his son Henry Routledge junior.

When Henry Routledge junior died 1878 the cottages and house with shop passed to his sister Miss Arlette Routledge, who held the property until 1908 when she sold to the tenant Lewis Jarman. Ownership remained with Lewis Jarman until he sold the cottages in 1948 to Eleanor Lee and she turned them into a single dwelling with a Post Office within the roadside facade. 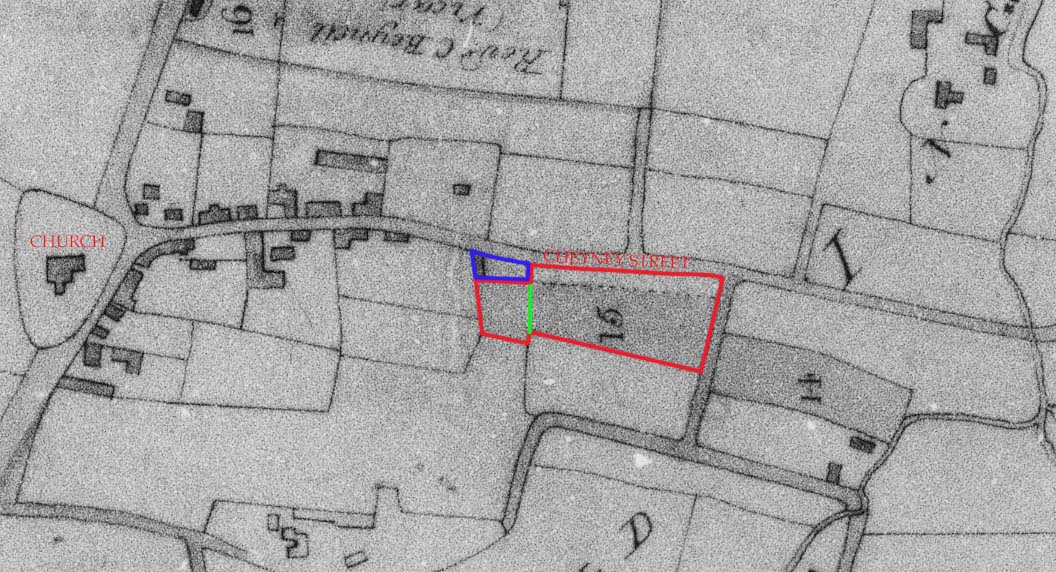 The cottage with garden is outlined in blue. The adjoining land, shaded and numbered 15 is Cook's Close 1a 2r 27p, an old freehold inclosure allotted to the Earl of Hardwicke in exchange from St John's Cottage. The roadside strip of land was already in the ownership of Hardwicke. The full extent of Cook's Close after Enclosure is outlined in red. The description includes that the garden of Joseph Wright lies to the north and west. The land to the left of the green line was added as garden to Nos 22 & 24 at a later date.

Plot 12 outlined in blue is 22 Cheyney Street. Owner and occupier Joseph Wright cottage and garden 17p. Outlined in red is the adjoining land, of which the owner is Earl of Hardwick and occupier Abraham Pearmain Cook's Close pasture 1a 3r 38p. The land to the left of the green line was added as garden to Nos 22 & 24 at a later date.

Tenants of No 22 Cheyney Street 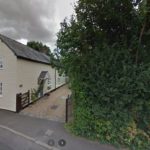 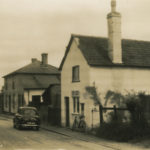 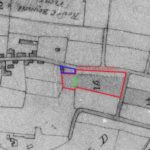 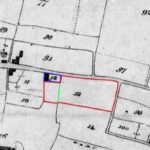