The heading ancient mills should not be taken too literally, although the intention is to cover all the known mills from earliest times, whilst each of the two “modern” mills has its own history Saunderson’s Mill and Flitton’s Mill.

Mills were economically important and their ownership and control frequently fell within specific manors or the sway of influential holders of land. The farmers and tenants within a manor would be obliged to use the Lord’s Mill, which provided another source of income for the Lord.

The earliest mills, known to have existed in England were water mills and examples have been identified from as early as in the Romano British period 400AD to 500AD. Windmills did not arrive In England until around 1185.

This does mean that all mills recorded in the Domesday Book of 1086 were watermills. There were three land owners recorded in Steeple Morden. The Bishop of Winchester had 1 mill valued at 16d and 2 other mills at 32d [each?] Earl Roger had no mill recorded. Hardwin de Scales or Scalers had two mills valued at 2 ora. An ora was nominally worth 16d, although often adjusted to 20d.

A landowner is recorded as having a mill c. 1260, and millers were often recorded around that time.

Cheyney Manor Water Mill
There was a water mill attached to Cheyney Manor from 1325 and leased with its demesne in 1386, which had probably been acquired about 1320 by Sir Nicholas de Cheyney. It may be the south mill recorded  1308, with its mill pond by the Gatwell brook [Gatley Brook or Cheyney Water], although by 1423 it was decayed and no water mill was conveyed with that manor after 1544. A possible site for that mill can be identified, close to what may have been the mill pond, which later became became watercress beds and in the 1970s and 1980s was the Jarman family’s trout pool. It is annotated on the Tithe Map 1839 below and Plots 121, 123, 124 and 126 were all part of Cheyney Manor. There is also the 1960 edition of the OS 6″ to 1 mile map. Plot 123 was named Boydens Close, although the origin of the name it not known. Boyden is a common surname in Cambridgeshire, although it has not been found to occur in Steeple Morden.

It is possible the mill was further along the brook, close to Cheyney Water Farm House, although if there, its proximity to the Rectory Manor water mill, would suggest conflict between them for adequate flow of water?

Rectory Manor Water Mill
Another water mill, perhaps one of those mentioned in Domesday, passed from the Winchester manor to the rectory, whose mill recorded c. 1380 came to New College. It was leased with the rectory/parsonage farm and was often re-equipped until the 1480s with new wheels and stones, and was reconstructed in 1449 after 4 years of disuse. From 1506 to the 18th century it was regularly mentioned in leases and apparently still stood in 1629, but by 1795 it had long been gone, although its mill dam was still visible.It had stood just east of the former rectory/parsonage house, on the Cheney water. The likely site of the mill has been marked on the Tithe Map 1839 below. Plot 94 is named Mill Close and although it is no longer a single plot, still carries the name today. Bear in mind that the Rectory House and all the farm buildings were re-built after the date of this map, so whilst the positionings are broadly the same the building footprints are different.

Windmills
Cheyney and Brewis manors were both said to have windmills in the 1540s though they are not recorded earlier or later. Before 1500 there had been two windmills. One, called by 1307 the old windmill is said to have  stood on Windmill Hill by Woodway in the west field, slightly south of the Church, although that description appears to be contradictory, as the West Field adjoined Litlington and was also known as Litlington Field.

The other mill stood in the 1420s in the east field, a little north of the modern road to Litlington, where there was still a furlong named Mill Furlong in the 1790s. An approximate location is marked on the OS map below. 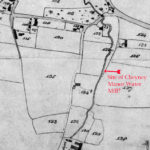 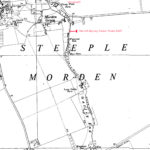 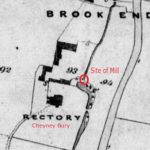 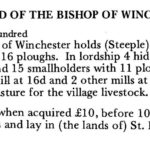 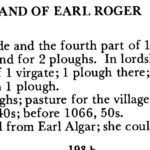 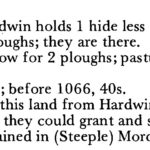