Incendiarism in the 19th Century

Popular protests in various forms feature regularly in history. In the 19th Century they were often framed as the labouring class versus the ruling or employing class or put colloquially the workers against the bosses.

One simple invention allowed for an destructive means of protest. It was the match, commonly called a lucifer in the 19th Century, which supplied an easy and mobile source of ignition. Burning an employer’s property down was an extreme form of protest, that was employed surprisingly often. The crime was named incendiarism and the perpetrator an incendiary.

A number of cases are recorded in Steeple Morden and almost exclusively of farm premises. Identifying the farmer and extent of damage to property was straight-forward, but finding the culprit and identifying their motive were more difficult. One cannot assume it was always a disgruntled employee. Indeed, farm fires offered spectacle and entertainment in an otherwise boring existence? The cry of Fire, Fire appears to have soon roused many in the village, who were quickly at the scene and not necessarily to help in any way. They came to spectate or worse, as Thomas Hall found at his fire in 1845.

One interesting occurrence in Steeple saw farmer Thomas Flitton lose some stacks in a fire set by his estranged wife Mary Flitton nee Pain. Her motive would have been known to all in the village.

Here chronologically are the known fires and please scroll down to the bottom of the page to see a variety of contemporary press reports.

The landlord, the Earl of Hardwicke put up a reward of £100 to find the perpetrator, which suggests the overall loss was major, as that was a substantial sum in those days, equating to three times the annual wages of a farm labourer. Perhaps the objective was to tempt somebody to give up the name of the culprit? If so, it seems not have worked as nobody appears to have been charged or tried in connection with this fire.

Why was Samuel Strickland targeted? It is not known. It may have been personal to him. He was a Committee Member of the Western Cambridgeshire Association for Apprehension and Prosecution of Felons and Thieves, which might be considered as code for let’s make sure we catch those thieving labourers we employ. His role with the Association may not have done much for his popularity and details of his Membership were published in Cambridge Chronicle on 17 June 1843. We have no way of knowing, though and this stands as pure conjecture.

Poor Samuel Strickland can have barely finished rebuilding his farmstead, when it was torched again. It was discovered at about 11pm on Monday 4 December 1843 in the rick yard and “despite of every exertion that could be used the entire premises, house excepted, fell prey to the flames”. Along with the buildings, corn in the barns, seven stacks of barley, beans, peas and tares were destroyed. All the cattle were saved and no other livestock are mentioned. The Earl of Hardwicke offered a reward of £50 this time, for the apprehension of the offender. No report has been found of person(s) charged in respect of this fire.

One newspaper report credited the attendance of the Bassingbourn engine with saving the farmhouse. This would have been likely a horse drawn hand pump, as it is rather early for a steam powered pump to have arrived in the countryside. As there were no street or exterior lights, these fires were often visible from a great distance and the Bassingbourn engine may have turned out having seen the fire in the sky, before the horse-mounted messenger from Steeple arrived. The press report also said that “although there were hundreds of the labouring class of both sexes in attendance, with the exception of a very few, they rendered no assistance in saving it”‘

A report in the Cambridge Chronicle, which had a bit of a crusade going against incendiarism commented “This case is an illustration of what we have said above. Both landlord and tenant are insured; so their loss will be trifling. But we understand that four men who would have had employment during the winter in thrashing out barley etc., have already been discharged by the tenant, who has nothing for them to do.”

Appears to have been a modest event at The Bell in Cheyney Street with a cow house set on fire on 30 December 1844 and a stable the following night. Jabez Saunders age 21 was charged and was due to appear at Cambridgeshire Assizes in March, although unclear if case was proceeded with.

This was a very serious fire, discovered at 11pm Saturday 8 March 1845 and the spread was so great, that nothing on the farm was saved, and it was with great difficulty that the house was preserved. It caught fire, but was speedily extinguished. Three barns, a stable, various carts and implements were destroyed. Five horses, four pigs and one calf were burnt to death and seven cows injured. Fifty bushels of thrashed wheat and a great quantity of peas, barley and oats were lost.

A notable feature of this fire was the thefts and plundering of the contents of the house, for which several men were later detained and charged. The detailed stories are told below in the newspaper reports. Briefly, Thomas Ball age 21 and William Webb age 45 for stealing ham and piece of pork, both guilty and sentenced to two months hard labour. Thomas Weyman was fined 40s for freeing Ball and Webb from custody of Police Constable Robert Coxall. Thomas Parker for stealing metal machinery of bean mill, guilty two months hard labour. Jesse Waldock age 37 and Samuel Clements age 29 for stealing £10 and £5 notes. Found not guilty. James Evans theft of two barley choppers. Not proceeded with?

It was about 6.30pm on Sunday 24 February 1850, when the cry “fire” went up from Cheyney Water Farm, a little way out of the centre of the village. The fire started or rather was started in the wheat house, which contained some straw and then proceeded to destroy the stables, wheat barn, full of wheat, barley barn, full of barley, then an empty oat barn. The stacks in the yard were also consumed, beans, hay, haulm and peas. Other buildings burnt down were the hen house, cow house and the piggeries; virtually everything apart from the farm house, although the live stock survived with the exception of some fowls. The Bassingbourn engines were in attendance and well supplied with water, as they would be with Cheyney Water and large pond to hand.

A person named Simeon Williams, a Steeple Morden resident, was taken up on suspicion, although subsequently released without charge in the absence of any persuasive evidence.

The Vicar of Steeple Morden had resided in the Rectory Manor House from 1820 and there farmed the Vicarage Glebe of just under 20 acres and part of the Rectorial Glebe of about 110 acres, so a reasonable sized farm for the time, requiring extensive farm buildings. The Rev. Thomas Brereton was appointed Vicar in 1830 and is not recorded as having any particular disagreement with his parishioners. However, on Saturday 14 December 1850 the farm homestead was fired and all destroyed except the newly erected brick house. Both the buildings and contents were insured and the total loss was estimated at £3,000.

About 7pm on Tuesday 7 January 1851, a number of stacks on a piece of land south of Ashwell Road owned by Thomas Flitton of High Farm were found alight and all destroyed owing to the strong wind blowing, with a total value of £400. The incendiary turned out to be Flitton’s estranged wife and the full story is told as part of the Flitton family history, rather than here.

Two stacks of wheat straw, standing in a field on the road from Steeple to Ashwell Station, were found alight about 8pm on Friday 22 November 1878. Both stacks were destroyed at a value of £70, which was insured. David Covington of Litlington, a labourer in the employ of Mr Hall, who had been sacked that morning, was heard in local ale houses claiming he had fired the stacks. Charged and prosecuted he was sentenced to five years hard labour, plus a further consecutive five years for another arson attack on Mr Russell’s stacks at Litlington. Bizarrely after he was released on licence in 1889 he fired 34 stacks in one night. It was said that you could see from Royston to Litlington, as if it was day light (a slight exaggeration?). This time David Covington was sentenced to twenty years hard labour. 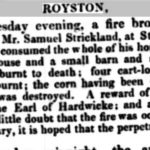 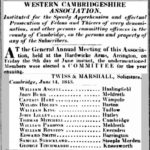 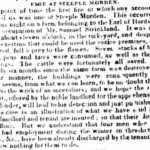 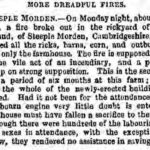 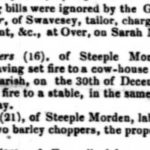 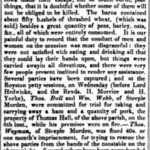 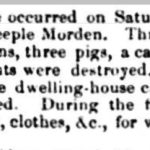 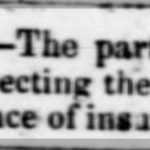 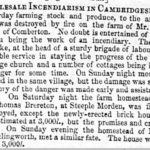 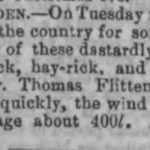 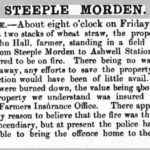 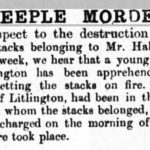 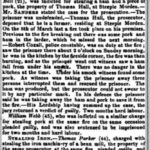 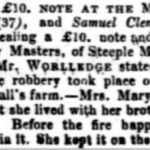 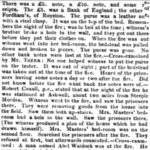 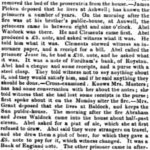 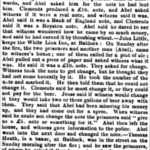 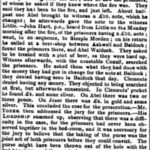 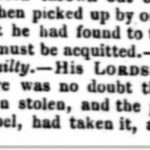