Way back it can be pretty certain that this family name originated from Flitton, Bedfordshire, although there may be more than one distinct family originating in that way. Today DNA testing could resolve that unknown?

Flittons were living in south-west Cambridgeshire from the 1500s at East Hatley, Abington Pigotts, Bassingbourn and adjacent villages, until Bassingbourn became their main centre. They were generally farmers or involved in agriculture, in some way or another.

Samuel Flitton was born at Bassingbourn in 1772, but saw an opportunity at Steeple Morden and there married in quick succession two sisters. Ann North in 1802, who died 1805 (not suggested that had been foreseen) and later the same year he married Mary North, with whom he had an extended family. His marriage to a widow, dropped him into the tenancy of St John’s College Farm at Brook End and, following Enclosure in 1808-1817, about 150 acres of freehold land that lay on the west side of Odsey Way, intersected by Ashwell Street. Samuel was a or even the major farmer in Steeple. He died in 1833 and his eldest son Thomas inherited the farming empire and decided to give up St John’s Farm and consolidate on the Odsey Way land, where he built a new stock farm in 1836 with substantial house and two extensive ranges of buildings, of which only the front range survives today. The focus was very much on rearing cattle.

Thomas married suitably to Mary Pain, member of the long-standing family of bakers at The Cross, who also owned a bit of land and farmed. However, all did not go well. We can only go by what we are told, but Thomas had a problem when it came to drink and turned into a wife-beater. Eventually Mary retreated to the safety of her brother’s house at The Cross, returning briefly on 23 December 1850 to the matrimonial home in response to entreaties from her husband. After more rows and beatings she left for good the following day and after Christmas on 31 December, under cover of darkness went to some stacks of Thomas’ that stood just to the south of Ashwell Road and fired them. It caused quite a stir. After investigation she was identified as the culprit and charged with arson and faced the Judge at the Cambridgeshire Assizes. He appears to have been a kindly Judge, guiding (instructing?) the jury to find her “not guilty”. Mary saw out her years as housekeeper for her unmarried brother.

What follows is a transcript of the newspaper report of the trial at the Assizes. There is a bizarre typo or error in the report. The Hoddesdon Road referred to is Ashwell Road!

Mary Flitton, wife of Thomas Flitton, of Steeple Morden, was charged with having on the 31st of December, set fire to a stack of barley, and a stack of wheat, the property of her husband. The prisoner was accommodated with a seat in the dock.

Elisa Dellow [Dellar] stated, that she had been in the habit of working as charwoman for the prosecutor. The prosecutor and his wife lived very unhappily together, and about the end of November he beat her and turned her out. She then went to her brother’s, and remained there a fortnight, but at the expiration of that period he wrote for her, and she returned on the 23rd of December: they quarrelled again, and she left the next day, and again went to her brother’s (Mr Payne’s, at Steeple Morden), having first consigned her husband to a place unmentionable to ears polite.

Cross examined by Mr Worlledge: Flitton is a very violent man, and drinks a very great deal. He beat his wife very severely: she went and bid him good bye before she went, and said she hoped he would find some one to do as well by him as she had done. She asked him what he meant to allow her, and he said 50l a year; and if that did not satisfy her, he would cut her off with workhouse allowance of 2s 6d a week.

William Kitchener, a neighbour of Flitton’s, proved that when the fire was burning he saw the prisoner coming from the direction of the stacks. Witness spoke to her, but she took no notice of him. Her footsteps were traced to the stacks the next morning.

Simeon Ross, labourer, Morden, was on the night of the fire going from Guilden Morden to the fire, near the watercourse on the side of the Hoddesdon road, saw a woman going along on t’other side of the brook, as he went to the fire: she had a plaid shawl and white straw bonnet : she was walking : when we turned to look at her, she turned more up the land : she was going towards Mr Kitchener’s : she was coming in direction from the fire : it was betwixt half-past 7 and 8 o’clock : lives about a mile from where witness lives met the woman : went out as soon as his people said they saw a fire.

William Pettengell was with last witness and saw the woman, who was coming from the fire: she turned away up the field as they got near her : she had a plaid shawl and white straw bonnet : she was walking a good pace.

Thomas Scott, was going along the Hoddesdon road, and saw Mrs Flitton get over the gate from the field into the road, she was on one side of the road and the witness on the other : could see her clearly she had plaid shawl and white bonnet : knew Mrs Flitton before : has no doubt it was her; this was about half an hour after fire broke out, witness’ sister Edith Scott was with him.

Edith Scott, was with last witness going to the fire, and on passing Mr Christmas’ gate saw Mrs Flitton near the gate, witness went up and spoke and she took hold of witness’ hand, went along Hoddesdon road, which is between mill and the fire; met Mrs Sharpe and she came back with Mrs Flitton : prisoner did not say why she did not go on to fire : she was crying and said she was bad : has known her some time : this was about eight o’clock.

Wm Gray said, on Sunday after the fire, five days after, was going along Hoddesdon road, saw an apron hang on the hedge on the side of the road, about 100 yards from the stack which was on fire, there was not gap, but could step over the hedge, there were footings close to where the apron hung, don’t know whether the footings were of a woman or a man, because there had been rain, traced the footings to road leading to where there is a gate into the Hoddesdon road, couldn’t see whether there were heels to the footmarks, there were no nail marks.

By his LORDSHIP : The hedge was about as high as witness middle, nobody could get through it they must get over, the apron was lying on top of the hedge.

Amos Hammond, labourer, examined the footmarks about eight o’clock the next morning; picked some lucifers up; it was between 30 and 40 yards from where Gray picked up the apron, close to footmarks; saw a match-box which Fletcher picked up ; there is no footpath where I traced the footsteps.

George Fletcher, constable of Steeple Morden, from information he received, went to a gap shown to him by Mr Kitchener ; traced footmarks across a field in the direction of Mr Christmas’s field, and from the gap down to the gates on the Hoddesdon road : the footmarks commenced at the place where Gray found the apron; it appeared that the person who made the footsteps came over the hedge; traced the footsteps up to the gate near Mr Clark’s farm, which opens on to the Hoddesdon road : produces an apron received of Gray. Took prisoner into custody on this charge, and told her if she could prove she was never off the road, she was with Mrs Sharp.

Cross-examined : Mr Flitton went with me to get the warrant.

Martha, wife of the witness Gray, said she received the apron from her husband; it had two tucks in it; witness took them out. Gave the apron to the constable.

Sarah Fordham, of Litlington, a dress-maker, proved that she made the apron for Mrs Flitton. She could not swear to her own work, but did to the material and pattern : made and sent it home about a month before the fire.

Fanny Fordham, lived with last witness, who was her sister; has seen Mrs Flitton wearing the apron, which she knows to have been prisoner’s : it had two tucks in it, and saw Mrs Flitton take gimp off it; knows it by the pattern and tucks.

Mary Ann Walker is shopwoman to Mrs Endersby, of Wrestlingworth; on the same day the fire happened, a woman with a dark shawl and straw bonnet came to her Mrs’s shop for some lucifers; the box found is similar to that supplied, it was a wooden one, and wooden matches : can’t say that the prisoner resembles the woman who bought the matches.

Rebecca Saunders, Wrestlingworth, knows Mrs Flitton; remembers the day of Flitton’s fire : saw her pass witness’ house on that day : she was walking towards Morden, towards Mrs Enderby’s [sic] : she had on black ribbon on bonnet and plaid shawl.

His LORDSHIP asked the jury whether they required to hear the counsel for the defence, and addressed them on the points of the case. If they thought there was sufficient doubt, perhaps they could stop the case.

In this the jury concurred, and returned a verdict of not guilty.

Mr WORLLEDGE said he felt it is [sic] duty to state that he was prepared with evidence to clearly prove his client was not the guilty party.

His LORDSHIP said he anticipated such would be the case, which led him to address the jury to the effect he had done. 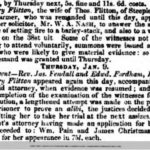 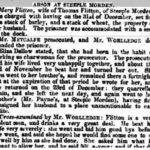 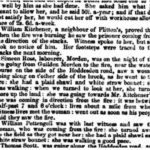 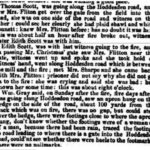 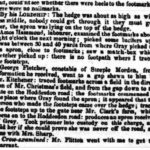 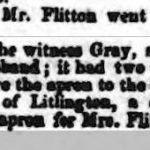 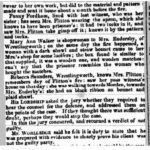 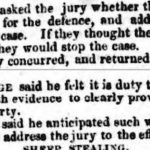