Creation of The Golden Orchard began on 29 September 1893, when Francis (Frank) Aikin Roscoe, rented from Montague Edward Fordham, two blocks of land accessed from Hay Street, which historically had been part of the small open field, known as The Croft or Craft. Having rented for some years Francis bought both blocks in 1903 from Montague Edward Fordham. He ran a successful fruit growing and market gardening business, until he sold up on 1 May 1930 and retired. He retained part of the southern block of Golden Orchard, with a bungalow, which he named Croftlands.

The Sale Particulars below are not good copies and cropped in places. Hopefully, they still tell the story. On the map the red line shows the extent of The Golden Orchard. The Sale Particulars refer to different portions on the map shaded in various colours, but unfortunately the copy available was in black and white only. The map is a pre-1900 edition of Ordnance Survey, as Woodlands is not depicted and that was built about 1905.

The reduced Golden Orchard appears to have been acquired by Walter Leslie Bolt. 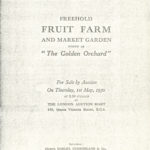 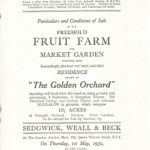 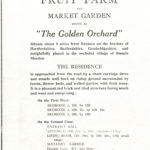 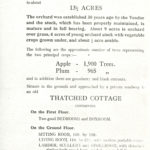 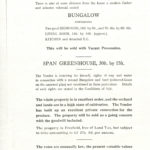 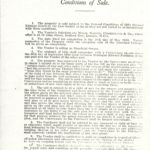 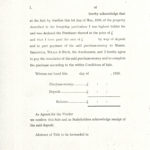 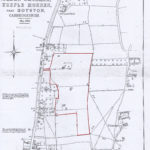 Sale Particulars for The Golden Orchard, Steeple Morden, 1 May 1930

6          The property was conveyed to the Vendor by the Conveyance mentioned in cause 5 subject as to the lands south of the line D E on the annexed plan “to certain rights of way and other rights for the neighbouring property late the property of Thomas Strickland over and upon the entrance or way from Hay Street to the same properties respectively.” The Vendor is only aware of the right of way between Hay Street and the properties aforesaid and the right to take water from the well mentioned in clause 7 hereof and of access to the said well for that purpose. The sale is made subject to the rights referred to in the said Conveyance and no requisition or objection shall be made or taken as to the nature or subsistence of any such rights or in any way respecting them.

7          The sale is subject to (i) a right of way for the owners and occupiers for the time being of the bungalow and lands retained by the Vendor (indicated by the colour green on the annexed plan) and their families and servants and others with or without horses and other animals carts carriages and other vehicles to be reserved or granted to the Vendor between the points marked A and Bon the said plan so as to give access between Hay Street and the said retained land and also across the strip of land dividing the dais two pieces of land coloured green on the said plan and (ii) a right for the owners and occupiers and others aforesaid at all times to take water from the well situate at or near the position indicated by the letter C on the said plan for use in connection with the said bungalow and land indicated by the colour green and a right of way accordingly for that purpose between the points indicated by the letters B and C on the said plan, and the Conveyance to the Purchaser shall be framed accordingly.

[Note: these are the only conditions with specific information. Unfortunately, the copy of the plan is in black and white and the area marked green is not shown.]