Apologies for the banner image, which is the driveway entrance to Albany House as seen from Station Road.

On 17 August 1973 Reginald William Jarman sold part of his land at 48 Station Road to Alexander Francis Dobson and Helen Irene Dobson. It was an access strip from the road and the block of land at the rear of No 48. The Dobsons had Albany House built and it has been much extended since. The land has also been added to, when Michael Joseph Brown and Lindy Brown owners in 1988, acquired part of the adjoining field from E W Pepper Ltd on 1 August 1988.

During the time the Browns lived there one of their sons set a fire in his bedroom and in  response to a 999 call the Fire Brigade arrived to find they could not access the property as the entrance gates were too narrow for their engine. Fortunately, the fire was not too serious and a few running firemen extinguished it. 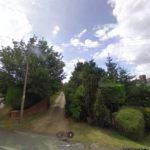 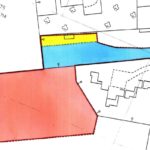