Also known as The Woodlands and the Christmas Light House.

Peer over the fence from the street and what you think you see is a substantial Victorian residence built by a wealthy local land owner. However, look more closely and after research, it becomes clear that this was built as a modest double fronted Edwardian villa that would have looked at home in any suburb in any town. This was the arrival of  urbanity in Steeple Morden and it was built for a modest local yeoman family. Set on a extensive plot, with further land behind, it has offered scope for extension over the years and what you see now is the 20th Century rendition of a substantial Victorian residence.

There was a small ancient enclosure of pasture, owned from the 1520s by St John’s College, which sat alongside Hay Street and was known as Hay Street Close.

At the time of Parliamentary Enclosure in 1816 St John’s ceded this close to the Earl of Hardwicke, in exchange for another close elsewhere. At the same time Hardwicke received two allotments of land adjoining his newly acquired ancient close. One was a small area on the west taken from Hay Street and the other a larger area of arable land taken from the open field known as The Crofts or Crafts.

The total area of the three areas of land extended to 3a 1r 7p, although the front close remained pasture and rear part arable. In 1839 they were both let to James Kefford, a small farmer, who lived at Orchard Cottage (today 58 Hay Street).

At an auction sale held 15 June 1892, as part of the dispersal of the Hardwicke estate, Lot 14, which included this holding, was bought by George Cannon. In an Altered Tithe Apportionment dated 1896, George Cannon is recorded as owner and George Duke, father of his son in law John Duke, as tenant.

When Cannon died in 1903 he left his properties to his son in law John Duke and it was John, who had The Woodlands built as a modest Edwardian villa. The first recorded occupant is a Mrs Duke in 1908 and this appears to be Florence Ann, widow of Herbert Duke, who had died in 1904. Herbert was John’s brother.

Florence had moved out by 1911 and was living in Hitchin. It is uncertain if John Duke sold The Woodlands or let it out. He died in 1923, when he was living at Myrtle Villa in Hay Street. In his will he did not mention The Woodlands and nor did his widow Fanny in her will, when she died 1927.

Occupiers of The Woodlands (as currently identfied)

The emergence of the plot from Parliamentary Enclosure in 1816 was from the juxtaposition of three parcels of land, owned by the Earl of Hardwicke as part of his Wimpole Estate. The first small parcel, number 23 on the Enclosure Map was actually part of Hay Street and the street was narrowed and a sliver of the highway allocated to the adjoining land owner, the middle parcel, number 24 was an enclosed field named Hay Street Close, previously owned by St John’s College and exchanged with Earl of Hardwicke and the third parcel, was an allotment out of The Crofts open field.  Full descriptions from The Enclosure Award are given below with and a copy of the Map.

Hay Street Close was a detached part of St John’s College Farm, which was centred on Brook End. This Close features in the St John’s College Estate Map of 1793, when Wilson was the tenant and it was measured at 0a 3r 38p. 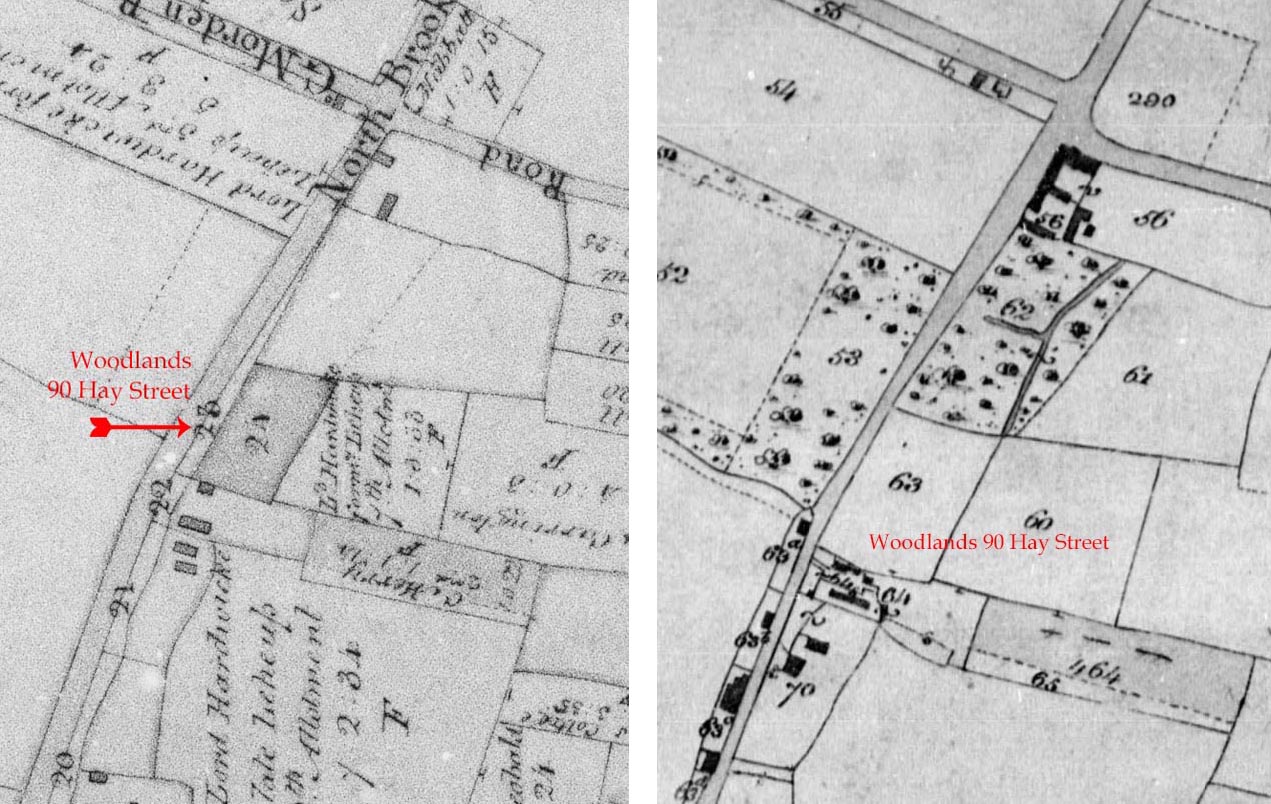 Enclosure Map on left with location of 90 Hay Street arrowed and Tithe Map on right with text across the two parcels.

The three parcels of land have become two and shrunk slightly in size from a total of 3a 1r 7p to 3a 0r 33p, so 14 perches have gone missing, not a major theft. On the Tithe Map above the two parcels are numbers 60 and 63 with Woodlands 90 Hay Street added as red text across the two plots, to indicate the location. 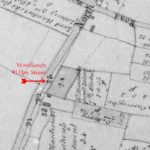 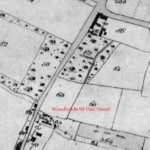 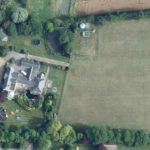