The Wimpole Estate built here two semi-detached cottages and today these are Nos 15 and 17.  The plot of land upon which they stood was generous and in 2003 Wedge Homes Ltd, property developers, acquired the site and both cottages. They refurbished the cottages and added Nos 13 and 19 on each side to create a terrace of four cottages

No 13 was sold by Wedge Homes to Andrew Robert Turner and Rebecca Caroline Hancox 0n 20 August 2004. The present owners bought it 29 November 2012.

No 15 was sold by Wedge Homes to Stephen John Cooper and Rosemary Elizabeth Cooper on 16 July 2004. The present owners bought it 28 September 2006.

All references in this article prior to 2003 are in respect of the original semi-detached cottages numbers 15 and 17.

John Jarman acquired these cottages, as well as Church & Moco Farms, from the Wimpole Estate on 31 December 1892. After his death, his trustees sold them on 12 July 1933 and the purchaser was noted as Baxter and purchase price £305. 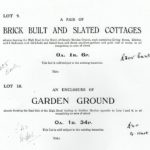 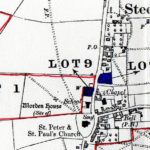