As early as 1920 the Cambridgeshire County Council on behalf of the Police Authority were negotiating to buy land in Steeple Morden upon which to erect a police house. It is not known which plot the Council had its eye on, but it appears that nothing came of these negotiations.

By the early 1950s the need for a police house was becoming pressing. Policing had long been structured round the “village bobbies” responsible for maintaining law and order in a parish or two and they needed to live on their patch. After the South Cambridgeshire Council acquired land in Cheyney Street for housing, now Russell Close etc., the County Council applied pressure to have a couple of plots for their Police House. However South Cambs stood firm and told them to look the other side of Cheyney Street, which they did and bought a plot directly opposite!

The land on which this house stands was originally part of The Bell and was sold 20 January 1954 by J & J E Phillips, brewers of Royston and owners of The Bell. to Cambridgeshire CC.

Bearing mind that The Bell and The Diggings were  both to close within three years, it is amusing that Phillips had this covenant included in the conveyance:

Not to use the property hereby conveyed or any part thereof or any
buildings to be erected thereon for the purpose of manufacture sale or
supply of beer, wines, spirits, cider, mineral waters or ice cream nor
permit the same to be used as a registered club”

As policing methods changed the village bobby was no longer a key part of the structure and village police houses became redundant. In 1984 the house was sold and acquired by Roger and Ruth Smith. In 1984 they applied for planning permission for an extension, porch and garage, which was approved and the work duly carried out.

In 2007 the current owners applied for extensions and a make-over in terms of appearance, with plans prepared by Tim Bond, Architect of Royston. These works were approved and carried out, creating the house as it appears today. 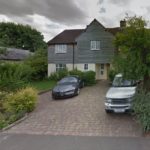 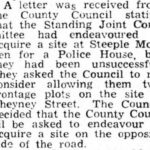 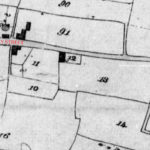 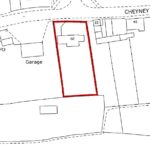