The Green: Origins and Development

These are initial thoughts on the likely origin of The Green.

The Green is today the name of both a hamlet and a road. Entrance to The Green is a sharp dive down from Litlington Road, crossing Cheyney Water by means of Knotts Bridge. The road then narrows until it opens out, with wider verges as it approaches the T junction at the end, from which there is a short spur to the right and a longer one to the left.

The name The Green is suggestive of an open grassed area in the centre of the village used for fairs, celebrations and perhaps sport, which is not Steeple Morden’s Green. How did The Green come about?

The historic parish land system was based on large open fields with individuals owning and cultivating small arable strips, which would be spread across several fields. This form of agriculture was not supportive of livestock, as there was limited grazing on grassy baulks dividing fields or in the fields themselves after harvest. Also, the owners and tenants of land were limited in number and depended on humble cottagers and peasants to work the land. However, those who worked the land, rarely had land themselves, although they needed to gather wood for their fires, graze a pig or possibly a cow and perhaps harvest a little hay to over-winter livestock?

Thus, most parishes and their manors had an area of common land to be used in several ways by cottagers. There is no doubt that Steeple Morden had such an area of common land, although today the challenge is to identify the original extent of our ancient common land or Green, which was part of the manor that eventually became known as Manor of Steeple Morden, Browis and Odsey. The manor was centred on the demesne land behind the Church and down the entire west side of Hay Street. The original large manor house stood behind the Church and School and was taken down in 1765. It had been one of the largest houses in Cambridgeshire.

Identifying the scope of the original common land or Green is challenging. Indeed, the boundaries of the common land likely flexed through the centuries.

Over time, though, areas were fenced off or enclosed, mainly to form secure pasture for livestock or for a dwelling and garden. Such enclosure increased in Tudor times and the traditional Green was nibbled away to provide animals with enclosed pasture, with the odd house and close of pasture popping up here and there.

The Enclosure Map 1816, Tithe Map 1839 and Ordnance Survey Map 1960 version (for which much of the detail is 1930s) are reproduced below and have been marked up with the possible extent of the original Green or common land. This is not a certain delineation. For example, along Church Street, both sides of Cheyney Street and the first stretch of Hay Street there would have been most likely, tenements and cottages for those who toiled within the Manor. How far the common land stretched on the north and whether it embraced the enclosures on the north-east corner are also debatable

It does appear to have had its eastern boundary alongside the Cheyney Manor demesne holding and enclosures down the western side of Cheyney Water, which supports the belief that Knotts Bridge was originally constructed in the 13th or 14th Century to provide access to lands to the south and was not an entrance to The Green. That came some time later, although before 1800.

Parliamentary Enclosure, which took place from 1806 to 1817 in Steeple Morden, ended the ancient strip system and replaced it with large fields in single ownerships. Importantly, all those with common rights to graze, collect and eke out an existence via the common green, found themselves with small allotments of land in place of those rights.

A topographical feature that influenced the evolution of the area of The Green is the spring that rises in the meadow to the east of Church Farm, which fed the stream running through the grounds of The Fox and The Hoops and onto Cheyney Water close to Cheyney Water Farm. On maps of 1816 and 1839 copious water is depicted at its source and the meadow was known as Pond Close. The stream itself is drawn at a size to suggest it was almost on a par with Cheyney Water.

When or why Knotts Bridge became the preferred entrance to The Green, is not certain, although what is now Black Lane was still a significant lane in the 1800s and seems to have fallen to the status of a footpath in the early 1900s.

THIS IS WORK IN PROGRESS AND THIS PAGE IS IN THE EARLY STAGES OF PREPARATION. 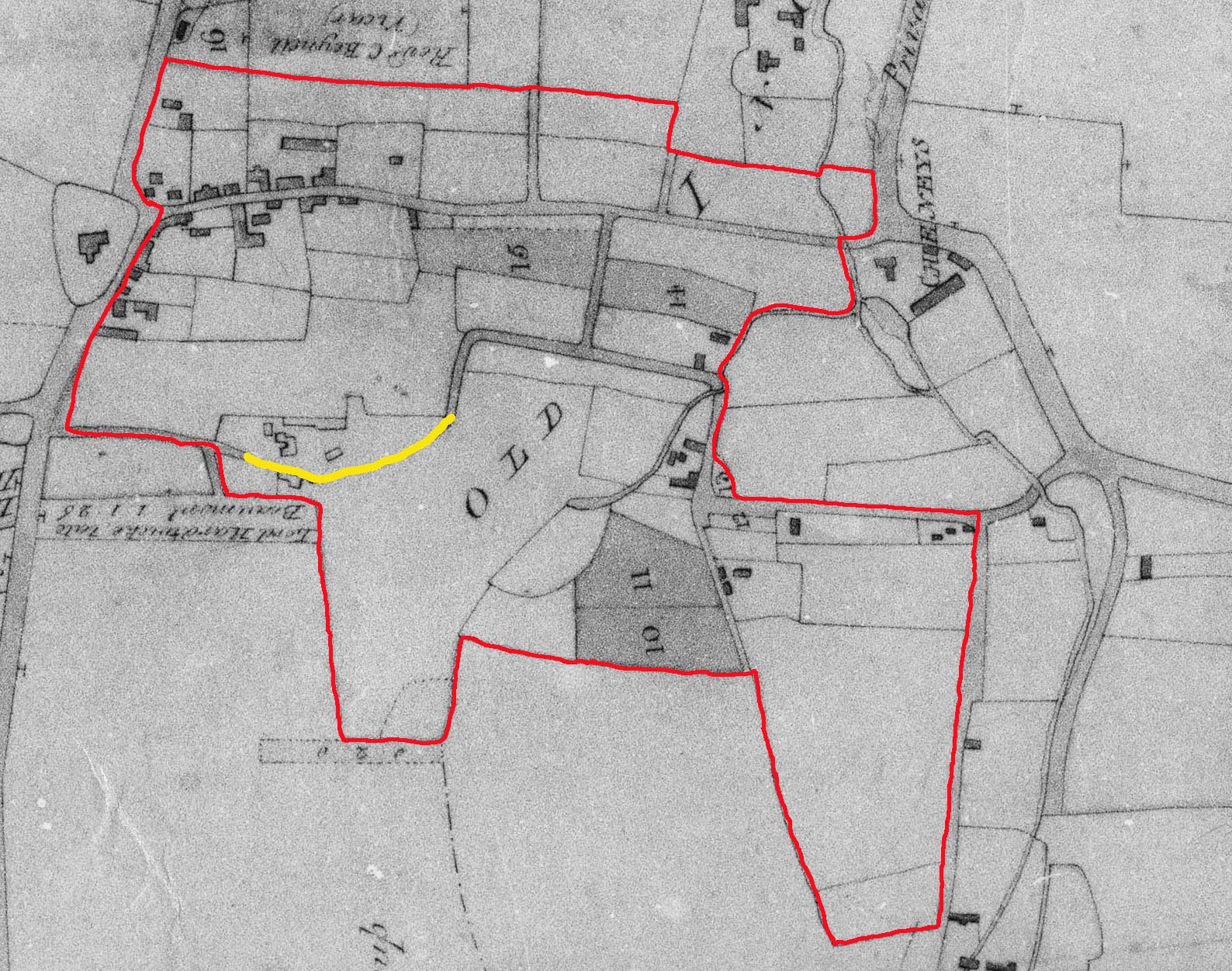 The red line suggests the likely ultimate boundaries of The Green and the yellow, how the road ran through. 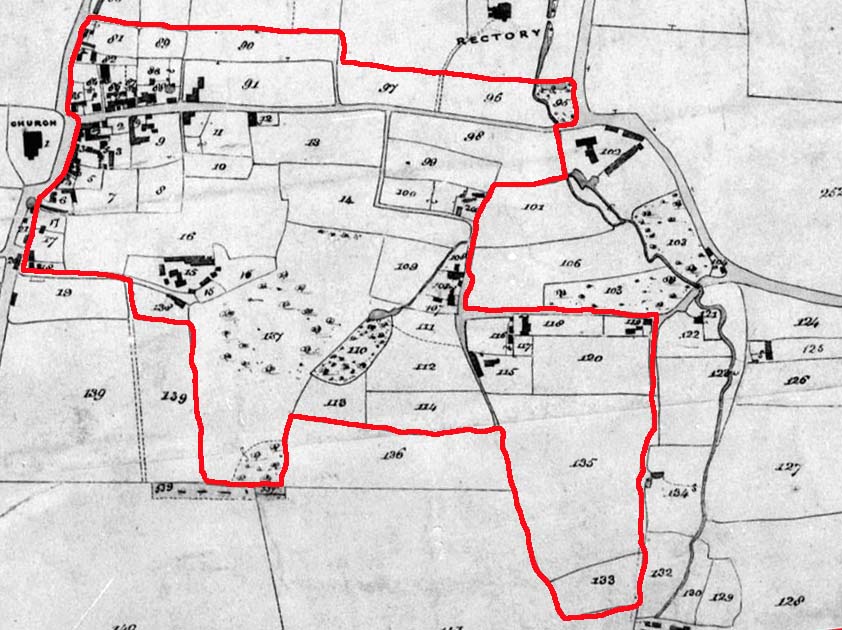 The red line indicates the possible ultimate extent of The Green. 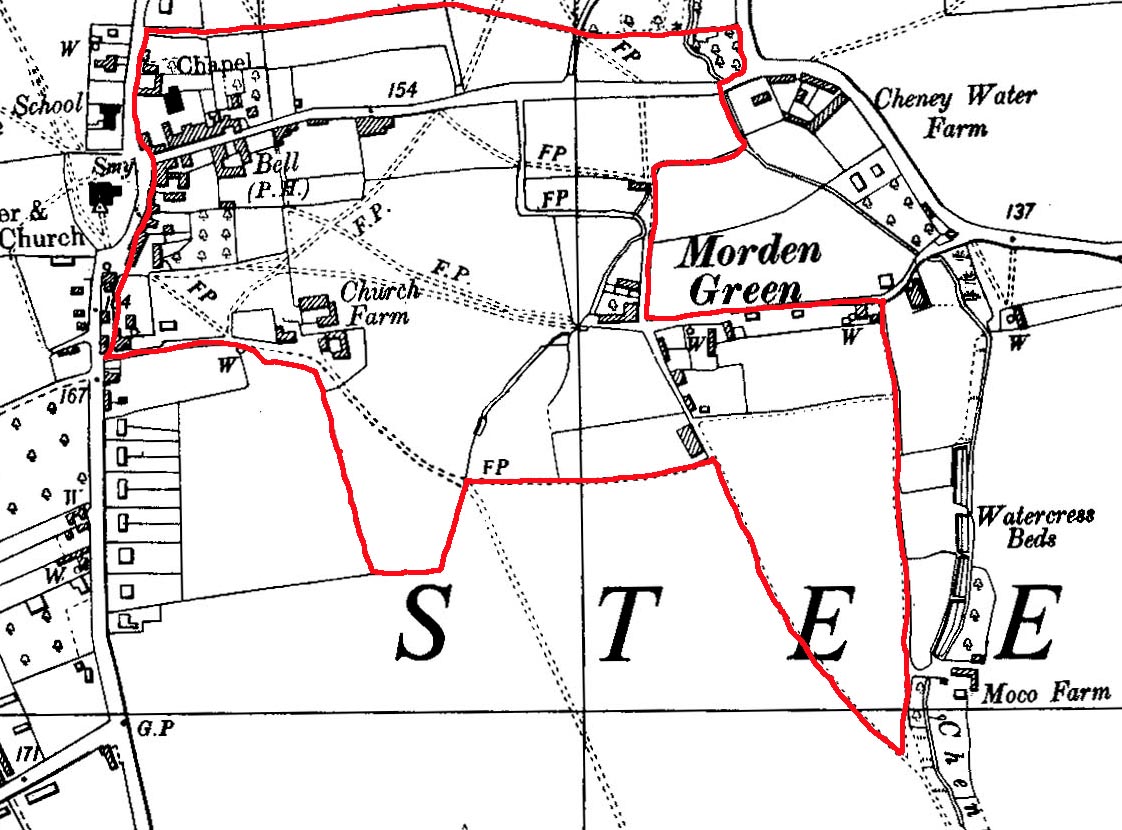 The red line indicates the possible ultimate extent of The Green. This 1960 edition of the 6" Ordnance Survey, generally shows details from the 1930s.

Maps of The Green 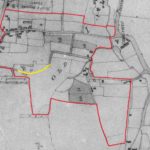 Concept of The Green on 1816 Enclosure Map 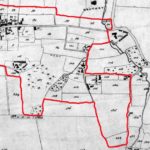 Concept of The Green on the Tithe Map 1839 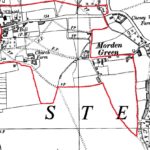