Land to South of 76 Station Road

This plot of land with a wooden chicken shed on it, was part of High Farm. Hertfordshire County Council acquired the farm in 1909 and it was let thereafter as small-holdings. It is believed the shed was erected during the tenancy of Frank Huffer and later when the entire farm was let as one holding, was tenanted by John Jarman who died in October 2015.

The Council decided to let all the farmland to adjoining farmers and sell off the farmhouse, where John Jarman had lived and its farmyard with barns, for conversion into dwellings. At the same time they applied to convert the wooden shed on this plot into a two bedroom dwelling under Class Q of the planning rules, that assumes permitted development. However, permission was refused by the Planning Authority in May 2019, owing to concerns about the structural stability of the building. Herts CC made a similar application in 2021, which was refused for several reasons, including structural instability, in March 2021.

As at May 2021 the plot of land and wooden shed were being offered “To Let”. 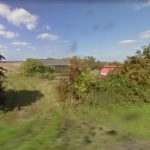