Albert Brockett was born July 1886 and died June 1975, both in Steeple Morden.

He served in the First World War, survived and returned home, although he had been taken seriously ill and was not expected to survive. As a result, he was discharged as medically unfit for further service. His illness may actually have saved his life?

Albert’s Army Service Record has survived, along with an associated file of his Discharge War Pension records. (National Archives WO363 & WO364).

He enlisted at the London Regiment’s HQ at 112 Shaftesbury Street, Hoxton, London on 2 September 1914, which was within a month of war being declared on 4 August.

He joined as Private No 2379 in the 4th (City of London) Battalion of the Royal Fusiliers (London Regiment), which was a Territorial Force. However, he was embedded in the regular army on the same day 2 September.

His attestation upon enlistment envisaged 4 years’ service in the Territorial Force and he was described as of 37 Sterndale Road, Brook Green, West Kensington and next of kin was William Brockett of Steeple Morden near Royston. His medical inspection report records his age as 26 years 2 months, height 5’ 9” chest measurement when fully expanded 37” with range of expansion 2”. He had good vision and good physical development.

On 4 September the 4th Londons entrained at Waterloo for Southampton, there to embark in HM Transport Galician bound for Malta sailing on 5 September they disembarked at Valetta, Malta on 14 September and began coastal defence and guard duties and spent time training 250 new recruits (including Albert). It was not long before they were on their way again embarking from Malta on 2 January 1915 on the HMT Avon bound for Marseilles in France, where they arrived 6 January and entrained to the front, travelling in 4th class passenger/cattle wagons, which were a notorious feature of French railways apparently.

They arrived at GHQ Reserve at Saint-Omer on 25 January and were re-equipped with new rifles and equipment and spent time training, until 12 March they marched to the front to take part in the Battle of Neuve Chapelle. The planned attack did not materialise, so they marched back to billets, having suffered 14 wounded.

As part of the 2nd Battle of Ypres, on 23/24 April the 4th Battalion force marched towards the Ypres Salient and went into the firing line on 26 April digging trenches and moving up in support of a British counter-attack, which failed and they ended up marching across open ground under shrapnel fire, until they reached a sunken lane, where they dug more trenches. They came under attack again the following day as they moved forward and suffered heavy casualties until being withdrawn after nightfall into reserve. Between 26 and 30 April the 4th Londons lost 365 out of 600 men and had also been suffering a large number of casualties from sickness in their shallow trenches.

Albert may have been involved in the Battle of Neuve Chapelle, although he was spared the horrors of Ypres, as he had been admitted to field hospital with NVD (nausea, vomiting and diarrhoea) and Fever on 11 April then sent to the rear on 8 May to base hospital at Saint-Omer and the Fever was now identified as Enteric Fever i.e. Typhoid, so Albert was shipped back to the UK on 4 June. Presumably to spend some time in hospital as there were no antibiotics and recovery depended on careful nursing and nutrition? Was he given leave to convalesce at home? No mention in his records.

On 9 September 1915 Albert was transferred to the 4/4 Battalion, which served as a training battalion providing drafts to refill the Front and also prepared sick and injured soldiers to re-join the battalion at the Front.

The first medical report in his records is dated 1 July 1916:

Originated 10 3 15 in France. States he was taken ill in Trenches, with Enteric Fever and removed to base hospl. Pale & very thin, cyanosed. Has no teeth. Heart dilated and mitral valve is diseased. Digestion is bad & he frequently vomits. Chronic cough.

Permanent. Presents ¾ – not likely to improve.

If the illness did originate 10 March it is possible that Albert was not fit enough to participate in the Battle of Neuve Chappelle, although the medical notes do say “States he was taken ill in Trenches”, which suggests he did get to the Front?

The records include his marriage to Maud E Brown, spinster on 5 February 1916 at St Matthew’s, Hammersmith by minister G E Powell and witnessed by R J Cowlin and G B Douglass. Next of kin is henceforward recorded as Maud Elizabeth Brockett of 35 Sterndale Road, Brook Green, N. Kensington. The marriage took place after Albert returned from France, but before his discharge, so as he was still in the Army he wore his Army uniform for the wedding. The residence for both of them at time of marriage is given as 37 Sterndale Road.

On 15 July 1916 he was formally discharged from active service at regimental HQ, Shaftesbury Street, Hoxton, London N1. He was described as age 29, 5’ 8½” grey eyes, dark brown hair, trade – grocer’s assistant and intended residence 35 (sic) Sterndale Road, Brook Green, Kensington. His discharge was “in consequence of being no longer fit for war service Para 392 xvi KR”. His military character is stated as “good” and the character awarded in accordance with King’s Regulations is “sober, steady & well conducted.”

Albert served 1 year and 317 days in the Army and this is a summary of his service:

In recognition of his service he was awarded the British War Medal and the Victory Medal and Albert’s receipt for these is dated 24 April 1922. He was also awarded the 1914-1915 Star, which was subject to a separate receipt – date unclear. As he was invalided out, he was also awarded the Silver War Badge (badge number B25 010 date of issue 25 October 1918). Finally, a certificate of thanks from the King, receipt signed by Albert Brockett of Steeple Morden 29 February 1919.

He was medically examined on discharge and had subsequent medicals on a regular basis. He was awarded a Disability Pension of 18d a week on 20 December 1916, increased to 13s 9d on 13 June 1917 and reduced to 5s 6d on 28 November 2017. It appears he was also supplied with false teeth. On 20 December 1916 his present address is given as c/o Mr T Goodman, Grocer, Station Road, Letchworth. Earning 14s a week uncertain. On 28 November 1917 his present address is Steeple Morden, Cambridge.

He was awarded a War Pension of 18s 9d a week for 6 months conditional, confirmed in a Royal Hospital, Chelsea letter dated 9 September 1919. 18s 9d equates to about £90 a week in today’s money.

There is a printed history of the London Regiment’s war

Have patience it loads slowly. 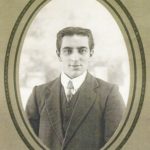 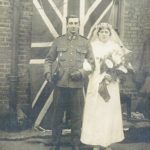 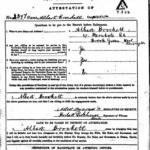 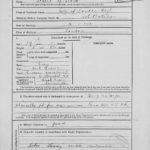 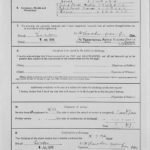 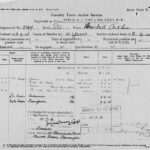 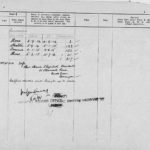 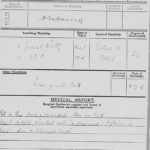 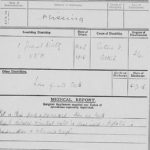 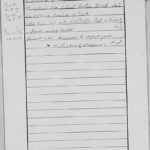 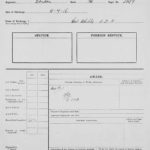 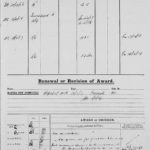 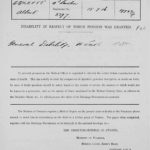 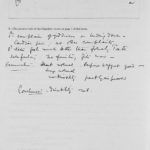 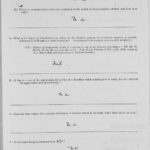 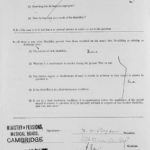 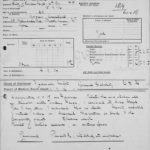 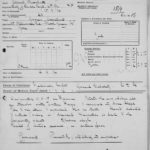 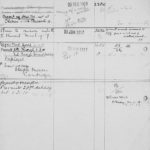 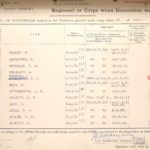 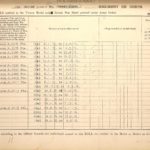