She was born 6 November 1877 in St Giles Fields, London, at 4 Little St Andrews Road, which is now Monmouth Street, one door away from the well-known Two Brewers pub. Her father, Jacob Sahler was a pork butcher.

Jacob had been born in 1846 in Stromberg, Germany and had come to London in 1856, age 10 to live with his uncle Philip, a retired baker. He married Blanche Amelia Robinson at St Peter and St Paul, Mitcham, Surrey on 5 October 1875.

At 4 Little St Andrews Road, they had Veronika Emily 1876, Isoline Blanche 1877, Gottlieb 1880 and in 1882 at Blackheath, Irene. The family is at 4 Little St Andrews Road in the 1881 Census, so the move to Blackheath will have taken place 1881/2. The three girls went to school at West End House, Oxford Street, Wellingborough, Northants. [1891 Census] In 1901 Isoline and Irene were living with their mother in Mitcham Surrey.

By 1911 Isoline was living with brother Gottlieb, a poultry farmer, at Sunnyside Farm, Debden, Essex. In 1912 and 1916 Isoline is recorded as a farmer in her own right at Clay Hill, Hitcham, Suffolk.

Next by 1920 she is living in South Street, Litlington, with brother Gottlieb and perhaps running a small farming enterprise, as land at Silver Street is mentioned. Sister Irene and her husband James Sandison were also living in Litlington in Church Street and later Silver Street. Similar details for both households are recorded in 1930.

By 1932 Gottlieb is no longer present and it turns out that he had moved to his father’s birthplace Stromberg, which is where he died, date unknown, although before 1963. By 1939 Isoline had become a general shop keeper in Church Street. That year the Sandison family is living at the White House, South Street, but are not recorded after 1939. James Sandison’s occupation in 1939 was given as asbestos worker.

Isoline continued running her shop in 1945, 1950 and 1955. She never married and retired at the end of 1957 and on 11 January 1958 she bought The Diggings, North Brook End Steeple Morden, where she lived until her death 27 January 1963. Actual place of death was The Villa, Fulbourn Hospital.

Settlement of  her estate, by way of Letters of Administration with Will attached, was handled by her nieces Veronica Margaret Blanche Carter and Isoline Joan Esperance Fortune, daughters of her sister Irene Sandison. A copy of the probate records are below, as well as those for Isoline’s mother Blanche.

James and Irene Sandison had three daughters. Veronica was born 1909 in London and married Ernest Edward Carter 1932 at Edmonton. They were running the Crown PH at Litlington in 1935. He died 1963 and Veronica in 2006. Isoline was born 1915 in London and married Thomas William Fortune at Royston. She died 2001. The third sister Irene Sahler Sandison born 1917 in London, married George W Hazelwood in 1940 and died 1994. 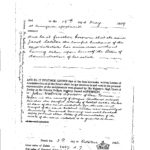 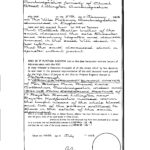 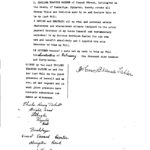