This is primarily the story of Richard Norman Pantry, who was the last licensee of the The Bell, before it closed in 1957.

Richard Norman Pantry was born 3 February 1907 at St Leonards, Exeter. His father Ferdinand Thomas Pantry came from Sellindge, Kent and his mother Georgiana was born in London. On 2 April 1911 the family was living at 34 Westgrove Road, Exeter and Richard had a brother George Ferdinand, who was seven years his senior. Father Ferdinand is described as army pensioner superintending clerk No 8 District (Army Office)

Richard married Maud Louisa Jones, who preferred to be known as Louisa Maud, in the 4th quarter 1929 in the Hitchin, Hertfordshire Registration District. Maud Louisa is recorded in the 1932-3 and 1935 Electoral Rolls for Litlington at Litlington Crossing, although there is no mention of Richard.

In the 1939 Register, compiled 29 September, Richard and Louisa Maud were living at May Villa, Becket End, Norfolk. Richard’s occupation is given as fitter and subsequently recorded as a Sergeant in the RAF. They have a son Richard D T, who was born 15 June 1938 in the Aylesbury, Buckinghamshire Registration District.

Richard Norman and Louisa Maud are listed in the 1950 and 1955 Electoral Rolls for Steeple Morden at The One Bell.

Richard Norman died age 69 in the 4th quarter 1976, with his death registered in Hitchin, Hertfordshire Registration District. Maud Louisa, by contrast, was 83 when she died, having been born 15 April 1907, and her death is recorded in November 1990 in the Brecknock Registration District in Powys, Wales. 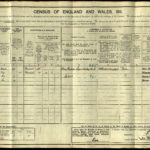