The name Handford has the briefest of associations with Steeple Morden. The family lived at The Little Wonder beerhouse, now 20 North Brook End [above] during their time here.

Joseph Hill Handford born 1833 at Portsea in Hampshire the son of James, a soldier, married Mary O’Neill on 25 July 1858 at St John The Evangelist, Lambeth, London.

He next turns up in Steeple Morden as publican and tenant of the small beerhouse The Little Wonder at North Brook End, taking over the tenancy from Elizabeth Brand at some point in 1883, although when he made his will on 8 April 1883 he was still living at Montague House, High Street Plumstead. Three of his children Christiana, born 15 March 1863, Katherine born 12 December 1868 and Joseph, born 26 December 1870, were baptised at Steeple Morden Church on 30 December 1883.

The following year disaster struck and Joseph died 19 August 1884 from hepatic, renal and cardiac disease, three years, ascites [accumulation of fluid in abdomen] and anasarca [severe edema]. Clearly, not a well man for some time and root problem was probably cirrhosis of the liver, so replacing the heavy work of a forgeman and much quaffing of cooling ale, with that of a publican was probably not a wise career decision.

In his will Joseph appointed son George Thomas as Executor and left his entire estate, which was valued at £63, to his six children. His wife Ann had to sell up quickly and she moved back to Plumstead, where she worked as a live-in nurse

Will and Probate of Joseph Hill Handford, who died 1884

BE IT KNOWN, that at the date hereunder written, the last Will and Testament of Joseph Hill Handford formerly of Montague House High Street Plumstead in the county of Kent but late of North Brook End Steeple Morden in the county of Cambridge Forgeman deceased, who died on the 19th day of August 1884 at North Brook End aforesaid was proved and registered in the Principal Registry of the Probate Division of Her Majesty’s High Court of Justice and that Administration of the personal estate of the said deceased was granted by the aforesaid Court to George Thomas Handford of No 39 High Street Plumstead aforesaid Borer the Son the sole Executor named in the said Will he having been first sworn well and faithfully to administer the same. 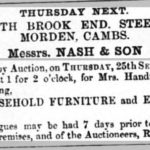