Son of a shoemaker, George Cannon was born at Thurgarton, Norfolk in 1820 and Samuel and Elizabeth his parents, had him baptised in the parish church on 11th February 1821.

In 6th June 1841 Census George was living at Keswick, Bacton, Norfolk, lodging with elder brother James and his wife Mary. James was a tailor by trade and George following suit was recorded as a journeyman tailor.

Not connected, but on the same date Ann Wiblin, who was born in 1820 and originated from Denchworth in Berkshire, was recorded as a female servant living in the parish of St George the Martyr, Finsbury, London in the household of a poulterer and his wife, George and Hannah Barrett

George soon left rural Norfolk for the delights of Finsbury, where his path have crossed that of Ann and they were married in 1845 at St George’s, Hanover Square, London.

On 30 March 1851 George Cannon is found in the Census residing in the parish of St George the Martyr at Red Lion Passage, a lodger in the household of John and Jane Wilson. George is recorded as 30 years old, married, occupation tailor and birthplace Norfolk; no wife is recorded.

His wife Ann was recorded on the same date at Abington Pigotts, staying as a visitor with Jesse and Mary Pearmain. What brought her to Abington Pigotts we can only speculate, although her younger sister Elizabeth born at Denchworth in 1823 had married John Hutcherson of Litlington at his parish church on 21st June 1845. It is likely that she was visiting her sister?

Abington Pigotts must have appeared attractive as by 7th April 1861 George and Ann Cannon were residing together in a cottage close to Manor Farm. In that Census he was age 41, a tailor, born Thurgarton, Norfolk and Ann was 40, a school teacher, born Denchworth, Berkshire.

They are recorded at Abington Pigotts again in the Census on 2 April 1871. George is 40, tailor and same birth place. Ann is 40, no occupation given and same birth place as previously. A niece Emma M Hutcherson age 11, scholar, born Litlington is living with them. Emma was a daughter of John and Elizabeth Hutcherson nee Wiblin.

On 1 January 1880 at Abington Pigotts their niece Emma Matilda [Tilly] Hutcherson married John Duke, a farmer, cattle dealer and publican, the fourth son and seventh child of George and Harriet Duke of Home Farm in Cheyney Street, Steeple Morden. John had been born, though at Great Chishill in 1857.

The marriage certificate correctly gives her father as John Hutcherson, although the newspaper report of the wedding describes her as the adopted daughter of George Cannon, who hosted the wedding celebrations. The newly weds set up home at the Darby & Joan at Abington Pigotts.

Niece Emma Matilda, wife of John Duke, died in September 1888 and just over a year later John re-married to Emma’s sister Fanny Hutcherson. The marriage took place on 28 October 1889 at St James’ Church in the parish of St James’ Highway, Enfield, with both parties giving 22 Sutherland Road, Ponders End as their place of residence and witnesses were Arthur Handscombe and Agnes Handscombe. One can only ponder as to the reason for the wedding taking  place away from their home parishes of Litlington and Abington Pigotts? John and his new bride returned to the previous marital home at the Darby & Joan.

Ann Cannon died in October 1891 age 71 and was buried at Abington Pigotts.

At some point, between 1892-1895 George moved to Orchard Cottage, Hay Street, Steeple Morden and is recorded as living there in the Census 31st March 1901. John Duke is head of household, with second wife Fanny and their son Percy John. George Cannon is described as uncle age 80 living on “own means”.

Orchard Cottage was actually owned by George. Rather surprisingly as he was retired and a widower, he had bought five parcels of land in Hay Street, which made up Lot 14 at the Wimpole Estate Sale held 15 June 1892.

The tenant Geo. Duke was the father of George Cannon’s son-in law/nephew John Duke and hence it was John and family, who along with George, set up home at Orchard Cottage, situate on parcel 72.

In an Alteration to the Tithe Apportionment recorded in 1896 the parcels were described, under owner George Cannon and tenant George Duke as:

Death of George and his Will

George died August 1903 and was buried at Abington Pigotts on 29 August and in the burial register he is described as of Steeple Morden (brought from that village).

In the event of John’s death in my lifetime and if my niece Fanny Hutcherson now living at Orchard Cottage, Steeple Morden shall survive him, all the above to her.

Residue to Fanny Hutcherson if she survives me, otherwise to John Duke.

Notes: William Coxall originated at Barkway, married Mary Ann Curd of Wateringbury, Kent in xxxx. He was a tailor in London and died 1881, with Mary Ann dying 1896. William Percy and George Thomas were two of their children, but why they were singled out for bequests is not known.

The Cautherley family originated in Shropshire and a branch settled in Abington Pigotts, so George was a local man and effectively the manager of Fordhams’ Bank (now Barclays) in the High Street, Royston, he subsequently became a coal merchant.

Arthur Handscombe is the same Arthur Handscombe as witnessed the marriage of John Duke to Fanny Hutcherson at Enfield in 1898 and Agnes was his wife. Arthur originated from Meldreth and found employment as a machine gun fitter at the Royal Small Arms Factory at Enfield. 22 Sutherland Road, given by John and Fanny as their residence was at that time actually the home of Arthur and Agnes. 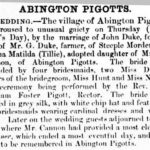 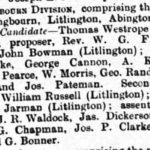 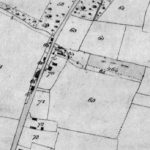 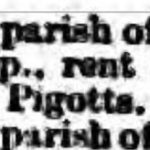 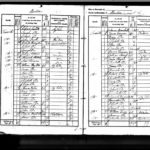 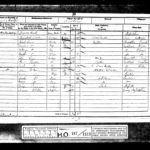 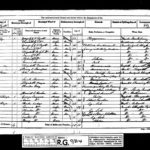 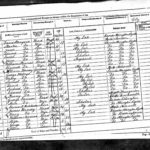 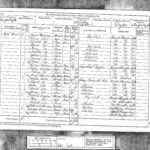 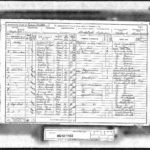 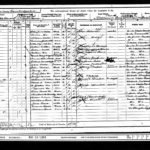