The Hunt family at North Brook End Farm owned traction engines with ploughing and threshing tackle, which were hired out to local farmers. On Saturday 21 February 1903 an engine towing a threshing machine and elevator was returning to North Brook End along Hay Street. Charles Harradine was driving, with William Oyston as flagman and William Ilett as third man.

Somehow, just after passing the village shop (Mr Swan’s) William Oyston appears to have slipped from the tackle and was run over by the wheel of the elevator and killed. Neither Harradine or Ilett noticed him fall or that he was missing, until they got back to the yard at North Brook End. William Oyston was born October 1849 at Steeple and christened 28 October 1849. He had married Maria Matthews on 16 October 1872 and in 1903 they were living in Church Street. Maria identified the deceased as her husband.

A witness at the inquest, who found poor Oyston dead in the road, was Alfred Brockett resident in a cottage on the site of what today is 48 Hay Street, Little Orchard and at that time next to the village shop. Alfred was a carpenter born in 1820 at Guilden Morden, who married Ann Charter of Steeple in 1843. Alfred took over the tenancy of the cottage from his parents in law Charles and Susan Charter. He subsequently moved to live in Cambridge, although this report implies he also spent time back in Steeple? 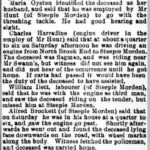 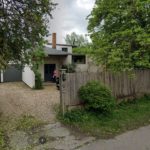