At the Melbourn Petty Sessions held 1 April 1850 Mary Knott of Steeple Morden, single woman, attended and made application for a summons against Edward Auburn of Stotfold, Beds for the support of her bastard child – summons issued.

At the Arrington Petty Sessions held 15 April 1850, Edward Auburn appeared and admitted being the putative father of the bastard child born of Mary Knott on the 14 February last. An order was made for payment of 1s a week with £1 9s costs.

The birth of the child was registered on 25 February by Mary’s father Robert Knott, with the name William and the Father’s name was left blank. No baptism is recorded around this time, although William James Knott was baptised as an “adult” at Steeple Morden on 14 October 1866, father was left blank and mother given as Mary Knott of Steeple.

Mary Knott was the daughter of Robert and Elizabeth of Steeple Morden and was baptised in the Parish Church 28 May 1826. With son William only four years old, she died on 20 April 1854 from typhus at the Royston Union Workhouse, described as servant age 25 [sic, clearly error]. Her burial is recorded at Steeple on 22 April 1854 and she is described as of Steeple Morden from the Union [Royston Workhouse] age 29. Mary and her son William have not been located in the 1851 Census, nor William in 1861. 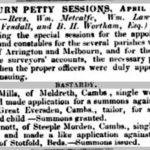 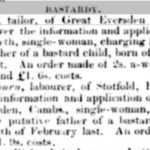 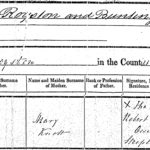 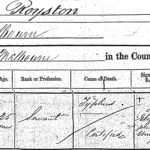