It was reported in the Cambridge Chronicle 17 August 1844 that a young man named Warboys, whilst gathering apples at Steeple Morden,  had tumbled from a tall apple tree and “was precipitated to the ground with great force”. He fell Wednesday 7 August and suffered at home until the Sunday morning the 11th, when he expired. He was buried 13 August in the Churchyard, age 23 and described as of this parish.

The family home at that time was probably the cottage on Litlington Road, which used to stand roughly where Greenway Farmhouse is today.

Edward had been baptised 3 December 1820, the son of Thomas & Rebecca Warboys, carpenter of this parish. 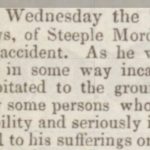