Millions served in the First World War and three quarters of a million lost their lives, which prompted a great wave of public commemoration, with memorials erected across England, to which the official policy of not repatriating the dead added impetus.

Sir George Fordham JP of Odsey was the driving force behind Odsey having its own memorial and he paid for it and gave the land upon which it stands, at the side of Station Road outside 96 Station Road, which was Odsey School. It is built of symmetrical slabs of Portland limestone in the form of a monolithic stone of remembrance, measuring height 1870mm, width 1700mm and depth 470mm.  The incised inscription and list of names are painted black and commemorate those who died in World War I and II.

It is said that the memorial was designed by Sir Edwin Lutyens, who had been commissioned by Mr & Mrs Wolverley Fordham in 1918 to reconstruct Ashwell Bury, although progress on this was delayed by the War. In the meantime, Lutyens was asked by the Parish Memorial Committee (chaired by Wolverley Fordham) to submit, along with two others, a design for the Ashwell War Memorial and Lutyens’ design was chosen.

It is said that Sir George Fordham asked Lutyens to design the memorial for Odsey. However, no evidence has been found for this and it may be that the likeness to the Cenotaph in London (by Lutyens) and the proximity of Lutyens work in Ashwell inspired the attribution? The Odsey memorial is not listed in the “definitive” list of Lutyen designed memorials in the book Lutyens and the Great War by Skelton and Gliddon.

No details of the dedication ceremony have been found.

The inscription at the head of the memorial reads IN HONOVR OF THOSE WHO FOVGHT AND IN MEMORY OF THOSE WHO FELL IN THE GREAT WAR 1914-1919.

The stories of these men will be added shortly.

On the memorial at Ely the names W F KING  A G KING  F T JOHNS are missing and E WHITE appears as T White.

By 2007/8 the memorial was overgrown by the hedge and hardly visible. Members of the Morden Branch of the Royal British Legion cleared and tidied the site and memorial. Jeremy and June Fordham funded a replacement backing fence.

In 2016 a grant of £1,270 was awarded by the War Memorial Trust to steam clean the memorial, repaint the black lettering and repoint as necessary with lime mortar.

Odsey War Memorial is listed at Grade II for the following principal reasons: * Historic interest: as an eloquent witness to the tragic impact of world events on the local community, and the sacrifices it made in the conflicts of the C20; * Architectural interest: an elegant Stone of Remembrance displaying a high level of craftsmanship and good quality materials. 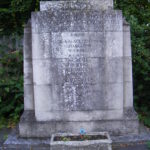 Odsey War Memorial after site renovated by RBL and new back fence. 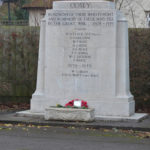 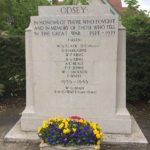 Odsey War Memorial after the 2016/17 restoration.