War Memorial in the Churchyard

Millions served in the First World War and three quarters of a million lost their lives, which prompted a great wave of public commemoration, with memorials erected across England, to which the official policy of not repatriating the dead added impetus.

If I should die, think only this of me:
That there’s some corner of a foreign field
That is for ever England.

whilst touching, might not have comforted the widow sitting alone in Steeple Morden. A physical memorial was more solid than words and visibly marked her loss, whilst offering a special place to grieve.

Steeple Morden having resolved to erect its own war memorial commissioned a design from Jeffery Lucas and it was constructed by monumental masons W Whitehead of Royston.

It was dedicated on Sunday 12 December 1920, with 300 people attending the ceremony, and unveiled by Lieutenant Colonel E C M Phillips DSO.

There are three inscribed panels.

There are websites recording memorials, which in respect of the Steeple Morden memorial, give incomplete listings of names, mis-spelt names or suggest that some names were omitted at a time when the memorial was restored, which is simply incorrect. The complete original list is as given above and all names are visible today.

The stories of those listed will be added shortly.

In St George’s Chapel at Ely Cathedral is the great Cambridgeshire War Memorial, which records parish by parish, the names of all 5230 persons from the County, who lost their lives in World War One. Under Steeple Morden the names listed include all those on the churchyard memorial, except in the Ely transcript S W Kirbyshire is given as A W Kirbyshire and J T Solomon as J T Soloman. There are, however, eight additional names C CHAPMAN   C CHAPMAN   T DOCWRA    J FOXON    E RAYNER    B WISEMAN    W STARLING   J WORBOYS

In 2009 the memorial was conserved at a cost of £2000, funded jointly by South Cambridgeshire District Council, the War Memorials Trust (£768) and Steeple Morden Parish Council. All defective joints were re-pointed with hydraulic lime mortar, loose flints were replaced or re-fixed and all the flint panels re-pointed with lime mortar. The memorial was also cleaned with water and non-metallic bristle brushes to remove some of the heavy lichen and to allow for the works to be undertaken.

Steeple Morden War Memorial is listed at Grade II for the following principal reasons: * Historic interest: as an eloquent witness to the tragic impact of world events on this community, and the sacrifices it has made in the conflicts of the C20; * Architectural interest: an ornate and striking memorial cross surmounting an elegant polygonal plinth and base; * Group value: with the Church of St Peter and St Paul (Grade II*).

DESCRIPTION: the memorial comprises a small medieval cross rising from a tapering octagonal shaft. The shaft is mounted on a polygonal plinth, itself surmounting a polygonal base with flint panels.

The inscriptions are carved in relief and read: STEEPLE MORDEN/ IN HONOUR OF THOSE/ WHO FOUGHT & IN/ MEMORY OF THOSE/ WHO FELL IN THE/ GREAT WAR/ 1914 – 1919.

The left and right panels either side of this inscription are both headed by the word FALLEN followed by the names of those who fell. 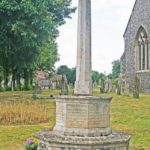 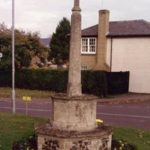 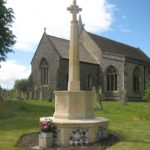 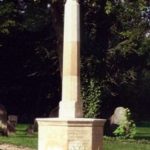 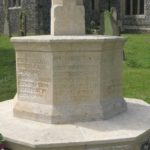 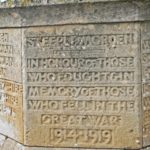 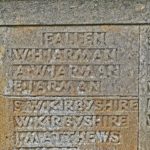 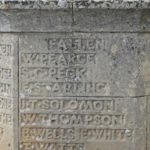 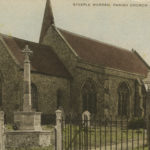 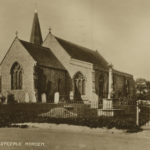 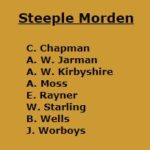