Common is a term used to describe carriers, who would transport goods for anybody. They were not contracted to any business or specific individual and were self-employed freelancers. Every village needed a common carrier to take goods to the market town and return with fresh supplies, especially for residents, who apart from a pair of feet, did not run to their own transport. Often the carriers followed an established route to a constant destination, with a set meeting place in town and a regular timetable. Many villages might need more than one carrier to cover all goods and local towns.

Depending upon the size and quality of the vehicle, bearing in mind we are talking in terms of something pulled by a horse or donkey, passengers might also be carried, even if they hitched a lift for only part of the journey.

Whilst their role was an essential one, providing that link with the “outside world”, they were not the sort of people to be noted in the record books. Their greatest recorded fame was likely to be getting drunk in town and ending up in front of the magistrates.  The best horses knew their own way home, with no guidance from reins or whip and oblivious to the loud snoring behind.

Mentions of a few Steeple Morden carriers have been found and their names are listed below.

Illustrated above is the The Carriers PH, Hay Street with members of the Kirbyshire family [?] It is said that David Kirbyshire, living here had no access to the stabling for his horse or donkey, other than in through the front door of the house and out of the back door, into the tiny rear garden.

In the 20th Century, the method of transport changed, even if the need remained. In the 1950s Mr Ross served both Royston and Hitchin markets, with his van. At the same period, for specialist animal transport Cecil “John” Savage was your man with his purpose-built cattle truck; Mondays were Cambridge Market day. 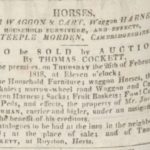 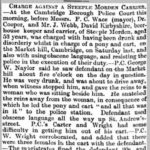 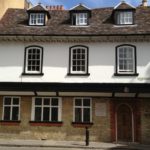 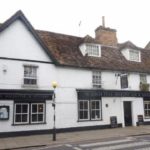