Parish Councils came into being with the passing of the Local Government Act of 1894, by which the Government designated the civil parish as the basic unit of local government in rural areas. Parish Councils took the place of the traditional Vestry Meetings, which were historic bodies managing various matters across an ecclesiastical parish. The civil parish of Steeple Morden is geographically the same, with identical boundaries,  as the ancient ecclesiastical parish.

The Royston Crow of 7 December 1894 carried a report of the formation of the first Parish Council for Steeple Morden:

During the first fifteen minutes 12 nominations were handed in, and all declared valid. The names having been posted on the blackboard and questions invited, the Chairman proceeded with a show of hands for the candidates, posting the votes in each case on the blackboard. The meeting having been informed by the Chairman that a poll could be demanded by any one elector, and a ten minutes having elapsed, the following 9 Councillors were declared elected:- Messrs Sydney H Fordham, farmer, 65; William Knott, labourer, 49; John Hitch, grocer, 48; Joseph Pearce, labourer, 48; George Duke, farmer, 37; Rev Eling Green, clerk in holy orders, 36; William South, baker, 35; Herbert Duke, farmer, 34; William J Wilson, pensioner, 34. Not elected :- J Franklin, 32; Thomas Pepper 29; Mrs E O Fordham 25. No poll demanded.

The meeting which lasted an hour was quiet and orderly, and the result arrived at gave general satisfaction. The first meeting of the Parish Council was called for Tuesday, the 18th, at seven o’clock in the school-room.”

The First Meeting of the Parish Council

“The first meeting of the Steeple Morden Parish Council was held on Tuesday last at 7 o’clock in the School-room. The proceedings were watched with interest by about thirty persons.

After taking their declaration of office the Councillors proceed to elect the following officers:- Chairman, Mr Ernest O Fordham; Treasurer, Mr Francis John Fordham; Clerk, the Rev Eling Green. Standing orders for the conduct of the business of the Council were considered and adopted. The Clerk was instructed to make application to the Vicar and Churchwardens to deliver over all documents, books, and papers belonging to the parish to the Parish Council at their next meeting.

On a motion proposed by Mr Sydney Fordham and seconded by Mr Wilson, that “It is desirable to provide a recreation ground for the village,” a discussion took place on the rival advantages of hiring or buying land for that purpose, and the subject was adjourned to the next meeting.

An order on the Overseers was signed on behalf of the Council to pay to the Treasurer a sum of money equivalent to a 1/2d rate  to meet the expenses of the Council for the three months ending March 31st next.

A discussion on the demand for Small Holdings in the village followed, and the Vicar informed the Council that he propose to divide 13 acres in the course of a few days into 1 acre holdings and that he had  received a great number of applications. The next meeting of the Council was fixed for Thursday, Jan 3rd.” 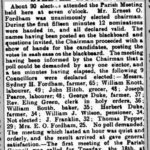 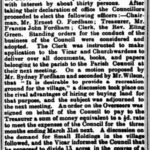 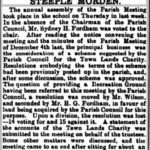