The first record of religious non-conformity in Steeple Morden is in 1779 when a barn was the registered for dissenting services. Another was registered in 1800. It appears that gradually the number of dissenters grew. It was said they had a Sunday School in 1818 and by 1823 that there was clearly need for longer term arrangements as regard a chapel.  The building chosen was a barn in the yard of The Waggon & Horses. Surprising perhaps, as abstinence or at least controlled consumption of alcohol became a tenet of Methodism.

Below is the original lease and below that is the replacement lease in 1827 for the remaining 16 years of the original term.. It is interesting to note the key participants resident in Steeple Morden are Thomas Barker, Thomas Hall and Samuel Pateman, with Davey Jeneway appearing in the 1827 lease.

Lease of Barn for Chapel. Janeway to Barker and others 26 July 1823 – Abstract

To have and to hold from the day of these presents for the term of 21 years. In Trust nevertheless and for the sole purpose of using the same as a place of divine worship and to permit the ministers of a certain sect of Dissenters from the Established Church of England called the Primitive Methodists to preach and perform divine service therein (the same being first licensed according to law). Paying unto Pearse Jenenway yearly rent of £2 2s 0d in four equal payments on 26 Oct, 26 Jan, 26 Apr and 26 Jul, first payment on 26 Oct next. Second party to repair, except for thatching, which Pearse Jeneway to repair.

On 24 December 1823 agreed between the parties that for any other sect of dissenters beside Primitive Methodists to use Chapel. Signed: John Pearmain, Pearse Jeneway (x)

On 18 October 1827 we within named in Second Party consent to give up the premises and destroy lease, Pearse Jeneway having agreed to grant a new lease, to fresh Trustees from 26 Jul 1827 for 17 years. Signed: John Pearmain

Lease of Barn for Chapel. Jeneway to Barker and others. 14 November 1827 – Abstract

Witnesseth that in consideration of rent and covenants of Second Party Pearce Jeneway hath devised and leased and doth devise and lease to Second Party all that chapel or building situate and being in Steeple Morden in the yard of Pearce Jeneway there now used as a place of Divine Worship by the people called Methodists of the Rev John Wesley’s connection adjoining and abutting upon certain premises of Thomas Goodchild on the one part and certain premises of Pearce Jeneway on the other part. Together with a right of way for Second Party and all other persons who shall go to Chapel to attend Divine Worship or shall return therefrom to and from the north west end of the chapel between the messuage or tenement of the said Pearce Jeneway on the one side and the messuage and premises of Thomas Goodchild on the other side, into the street.

To have and to hold onto Second Party from 26 July last past for one year, but with assurance of enjoyment of premises for further sixteen years, but upon the trusts for Methodist worship. And paying unto Pearce Jeneway £2 2s 0d by four equal payments on 26 October, 26 January, 26 April and 26 July, with first payment on 26 October next. The trustees [Second Party] to do repairs, except the thatching on the said chapel. 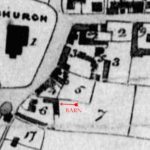 The Chapel Barn behind Waggon and Horses Tithe Map 1839