Steeple Morden: The gospel was first introduced into this town about the year 1765, by the Rev John Berridge, vicar of Everton, who, having opened a place in Flax-Lane, erected by a Mr W Chesham, that gentleman commenced preaching there, statedly, but never administered the ordinance of the Lord’s supper; on his becoming infirm, after nearly thirty years’ service, Mr Sharp succeeded him, who was followed by Mr John Strickland. The meeting at Flax-Lane was abandoned in the time of Mr Sharp, and a new one erected at North-Brook-End.  Mr Strickland commenced his labours under Mr Chesham, as an occasional assistant. He is the present pastor. The church consists of about twenty-nine members; and there are, on the average, about two hundred hearers. There is also attached to the place a Sunday-school, consisting of between fifty and sixty boys and girls

Without this potted history, written in 1819, it would be difficult to chart the early days of nonconformism in Steeple Morden. Flecks Lane would seem an unlikely location for a Meeting.

Rev John Berridge was a graduate and Fellow of Clare College, Cambridge. He lived in College from 1748-1757, whilst serving as curate of Stapleford, Cambridgeshire 1750-1755 and becoming Vicar of Everton, Bedfordshire in 1755, where he served until his death in 1793. Berridge was an Anglican evangelical revivalist and hymnist and is widely considered one of the great evangelicals of the 18th Century. During the period 1759 to 1773 he was also an itinerant preacher and travelled widely preaching effectively to country people in field and barn, It is likely his visit and preaching at Flecks Lane was the catalyst for the formation of a Meeting and it was W Chesham took up the baton and provided the leadership to grow this new grouping.

This would have been William Chesham, who was born at Dunton in 1732, lived at Wrestlingworth and in 1761 married Mary Bailey at Steeple Morden. They had four children all baptised in the parish church of St Peter & St Paul. He appears to have been a small farmer and probably lived at the Flecks Lion, 6 Flecks Lane. He died in 1804 at the age of 72 and may have been growing infirm around 1795?

Mr Sharp is more difficult to pinpoint, although the most likely candidate is John Sharp, whose origins are unknown, but he married Susan Fox at Steeple Morden in 1768. They had seven children. It is not known where they lived. John was a shoemaker, who deserted his family in 1792, although he returned at some point and was buried at Steeple Morden in 1800.

John Strickland was member of an extensive family of farmers, small land-land owners, brewers, bakers and shoemakers. They came to this area from Kent and Sussex and were prominent in Bassingbourn, Steeple and Guilden Morden and Ashwell. He is most likely John born 1756 at Steeple Morden son of John and Sarah, who married Ann Holben at Bourn in 1780 and farmed at North Brook End tenanting land owned by St John’s College, Wimpole Estate and Jesus College. He bought a few plots himself. He branched out into brewing and came unstuck in 1822, when he went bankrupt, owing a large amount to a London hop dealer, John Collett. Collett took virtually all Strickland’s land in recompense. When John Strickland died in 1831 he was described as of Guilden Morden, although buried at Steeple.

He seems a good fit, as he lived at North Brook End and would have been active in agricultural circles. His financial demise in 1822 could suggest that his religious activities may have reduced around this time, when he was 66 years of age? As a consequence the centre of gravity for the Meeting moved to Guilden Morden, from whence came many of those, who had attended the Meeting. They established a Meeting Room or Chapel in a cottage off the High Street in Guilden and followed this by the Chapel built 1838-1840.

From the evidence available initially, it could be deduced that the Guilden Morden Chapel was the original Meeting and that the cottage at North Brook End was established later as an outpost. The wording on the photograph below is actually ambiguous.

It has also been suggested that the Meeting at North Brook End was established to provide for the spiritual needs of the coprolite diggers employed in the area in the 1870s.

Instead, taking the evidence as a whole, this religious enterprise began in Flecks Lane and was enlarged at Meeting Corner, until decline resulted in the move to Guilden. You do not often hear this spot referred to as Meeting Corner these days, although it remained in regular use, certainly amongst North Brook End locals for some 150 years or more, after its conversion to a cottage.

There is more about the Cottages here. 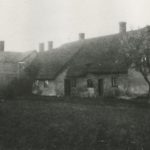 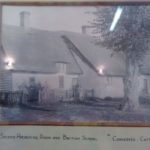 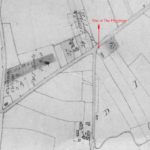 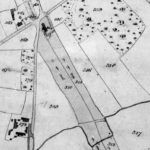