This modern barn conversion lies between 16a and 18 Brook End and does not appear to have been allocated a street number of its own. It was previously known as Hillside Farm Barn. Planning permission for conversion from agricultural barn to private house was granted 2002/3. 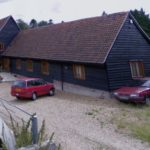